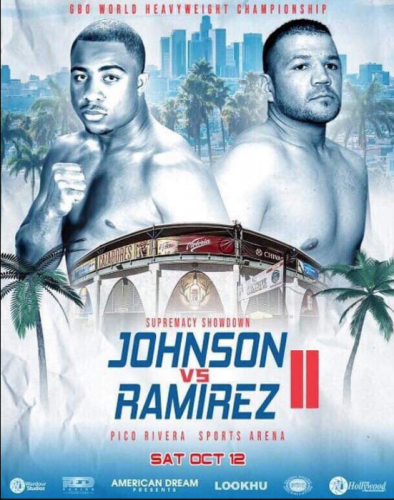 In 2017 Ronald “The American Dream” Johnson defeated Sergio Ramirez in Las Vegas in the season finale of Knockout Season 3.  The fight aired live on Azteca America. While Johnson won via unanimous decision, Ramirez proved to be a game opponent and gave Johnson a tough fight.

The two warriors will renew acquaintances on October 12th when they collide at the Sports Arena in Pico Rivera.  This time Johnson’s GBO heavyweight title will be at stake when they set foot in the ring. Johnson captured the title on June 15th in Davao City, Philippines when he dropped Saul Farah twice in route to a wide points victory.  This time newly elected Nevada Boxing Hall of Fame trainer Floyd Mayweather Sr. will be in Johnson’s corner.

The rest of the card promises to be action packed as Adelaida “La Cobra” Ruiz (8-0) will defend her GBO super flyweight continental title versus an opponent to be named in the near future.

Eddie Murphy’s nephew Brandyn Lynch (9-1) will fight for the GBO super welterweight California State title versus TBA in a chief supporting bout so the stars will definitely be in attendance.

Angel “El Moreno” Rodriguez’s GBO lightweight California State title will also be at stake versus an opponent to be announced in the near future.

The loaded fight card will also feature the pro debut of Nicholas Irizarry who is trained by Milton Lacroix who trains YouTube sensation Logan Paul and many other celebrities. His fight will be set at a catchweight of 142 pounds.

The fight will be broadcast live onthe new streaming media platform Lookhu and will be available to a worldwide audience on all major outlets. Visit Lookhu.com for more information.

**The initial press conference to announce this fight will take place this Wednesday August 21, 2019 at 3pm at the Beverly Wilshire inside the Champagne room**  All media is invited and all participants and celebrities such as Ray J, and Steven Nia, Chariman of Wardour Studios and W1 Platform – The Hollywood Block Chain, and many others will be available for interviews.

American Dream Presents was founded by Ronald Johnson in 2007. The promotional outfit has put on numerous shows with the likes of Don King, Zab Judah, Fernando Vargas, Joel Cassamayor , Michael Grant and many others. American Dream Presents is also working on a reality show with Ray J and Princess Love and Ronald Johnson called “Fit Two Deliver”. It will be featured on a major network sometime in 2019. ADP President Moses Miller was instrumental in putting this deal together to bring in the powerhouse Wardour Studios to help brand Johnson and set him up for million dollar fights in the near future.

RED Boxing Promotions is a Filipino-owned promotional company founded by Mr. Rey Cacoi Almirante Rodis. The company started last year and has already done several promotions here in the United States and also in the Philippines and Mexico. Rodis is the third generation of nationally respected boxing promoters tracing back to the 1960s when his grandfather Dr.Antonio Almirante started promoting in the Philippines.

With RED Boxing Promotions leadership having a unique background in professional athletics, we are able to provide experience and knowledge based management and agent services for athletes. We allow our clients to grow professionally and personally while we assist in securing their athletic future.

RED Boxing promotions being under RED Inc. or RodisEntertainment Digital is also an emerging multifaceted entertainment company engaged in the development of independent film for theatrical, direct to video, DVD and digital release

Lookhu is a streaming entertainment platform that broadcast the highest-quality digital entertainment live, and on-demand, our menu offers niche, celebrity-created content, across multiple devices. Lookhu is app-based, and highly focused on content within specific genres, including Sports, Comedy, Faith, DIY and more. We offer both short and long-form programming for subscribers in the U.S. and around the world. We stand out from the rest by offering our content at multiple price points, becoming the go-to platform for entertainment consumers who want more from their subscription services. For more information please visit http://Lookhu.com. Follow us on Twitter, Facebook or Instagram

Wardour Studios™ is a state of the art, next generation, film studio, with a creative and advanced technology foundation, specializing in Hollywood – China co-producing and co-financing. Wardour Studios is a full service Hollywood film and TV production company, with film and television IP, as well as expertise in live action and animated films. Wardour Studios’ team strives and is committed to the creation and development of advanced digital production, visual effects (VFX), virtual reality (VR), augmented reality (AR), motion capture,  artificial intelligence (AI) and Robotics, as well as exploitation of ancillary on a global basis. The team also possess extensive experience in post production, editing, cinematography, workflow management, and various other aspects of digital production and distribution.